Knitting FO: The Kalajoki socks are finished, with several changes. The first sock I knitted didn't have the toe shaping the pattern called for, which was referred to as an "anatomical toe", which forms a slant that complements the natural toe formation. I originally opted for a regular, basic toe. On the second sock, however, I decided to try the anatomical toe. 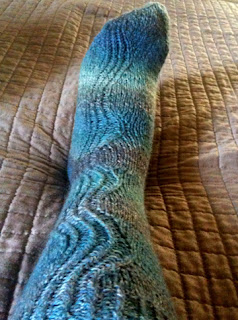 Now while I worked on the second sock, I also decided to incorporate a different heel than the pattern called for, which is your basic short-row heel. Instead, I'd do an afterthought heel. I listen to the Knitmore Girls podcast, and have heard them mention this type of heel construction before; they have revered it as the bees knees of sock heels. Then recently, another podcaster, Leslie of The Knit Girllls, announced that she uploaded a video tutorial for making an afterthought heel. I watched it and got so excited, that I just had to do it right away. Never mind that I had already completed one sock in another heel type, I was going for it. And it was great. A really fun and easy technique, and one that anyone who has yet to knit a sock must try. Personally, I find short row heels to be a bit of a pain. The afterthought heel takes all of the pain away. So if you haven't knit a sock before, but want to, by all means, do an afterthought heel. Trust me, it'll make your first time painless. Take a basic pattern like the one in this video sock tutorial from Knit Picks, and when you are ready for the heel, go to this tutorial, make your afterthought heel, then resume knitting the pattern to the toe, then go back and finish the heel. 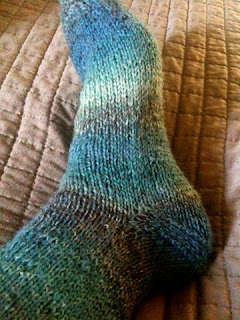 I closed up both my toe and heel openings with the Kitchener stitch. Lots of knitters have no love for this grafting technique, me among them. It took a lot of getting used to but after practicing it, it's really a breeze. Of course, there's a video tutorial, thanks to YouTuber The Knit Witch. After the sock was finished, it was obvious to me at that point that I had to rip back the first sock and make it like the second. And I did. 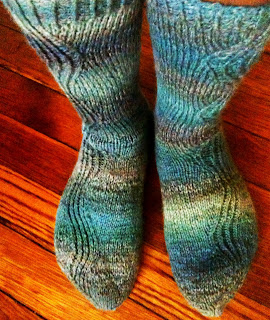 Current Knitting: I got my replacement knitting needle tips for my Options Harmony needles, so that I can now get back to my Indigo Playmate cardigan. The body is finished with about three inches of 2x2 ribbing along the bottom. I am now picking up for the sleeves, which I am knitting in the round, magic loop on a circular needle. The pattern is knit top-down, my first time knitting top-down for a sweater. And since it's not knit in the round, I got the opportunity to do lots and lots of purling. But unlike many knitters, I find that I am fond of the purl stitch. But I noticed that purling continental style puts a strain on my wrist and forearm. To give myself a break while purling back on the sweater, I decided to throw, or knit the purls English style, which gave a bit of relief because of the movements involved. And then I noticed something: My stockinette fabric looked a lot more smooth and neat where I had thrown my purls rather than picking them. So from that point on, I picked my knits (continental) and threw my purls (English).

Note: This and the next entry were put on hold. Sadly while I was writing these drafts back in April my father passed away. I hope to post up-to-date entries from here on out. Thanks. 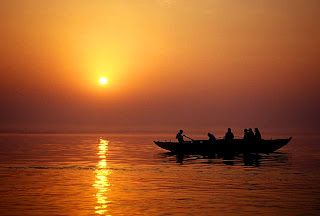 If tears could build a stairway,
And memories a lane,
I'd walk right up to Heaven
And bring you home again.
~Author Unknown

Great pair of socks and I'm so sorry for your lost, that's a great quote.

"The privilege of a lifetime is being who you are." ~Joseph Campbell~

MissMasala5
Chicago, Illinois, United States
I am a wife, mother and commander of a feline army.

Find me. Friend me.